These celebs went on amazing weight loss journeys and the results are astounding! Whether it be Christina Aguilera’s 20-pound weight loss or Mama June’s whopping 300-pound transformation, they are all incredible and inspiring in their own right.

He is arguably the world’s most famous chef, but even he was once self-conscious about his body. In a 2018 interview, he opened up about losing weight in an attempt to save his marriage in 2013.

“I was overweight, 18 stone [252 pounds]. I looked like a sack of s–t. I look at the pictures and think, ‘How did Tana stay around?’ Because Tana has got better-looking and more gorgeous. And there she is, getting in bed with a fat f—k.”

Ramsay has since maintained his healthier weight and frame. He regularly participates in Ironman events and loves to flaunt his fit physique beachside. 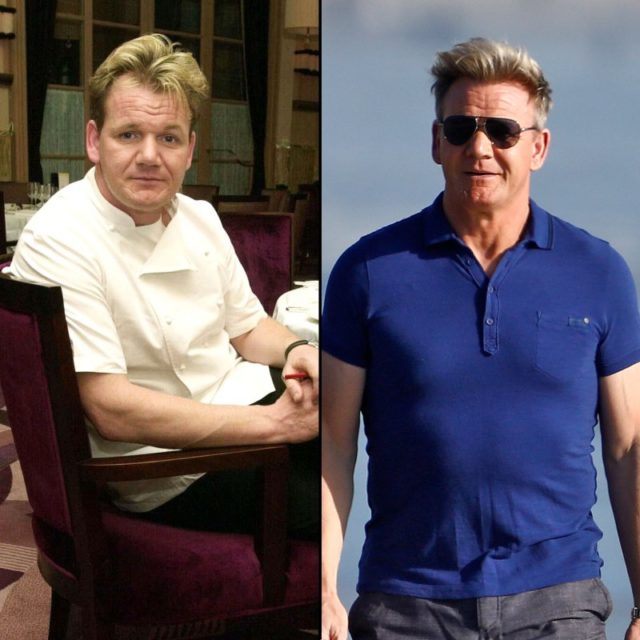 In February of 2018, Kevin Smith experienced a heart attack that almost cost him his life. Following this, his doctor advised him to lose 50 pounds. Needless to say, the Hollywood director took his doctor’s words to heart and was halfway to his goal in just a month. 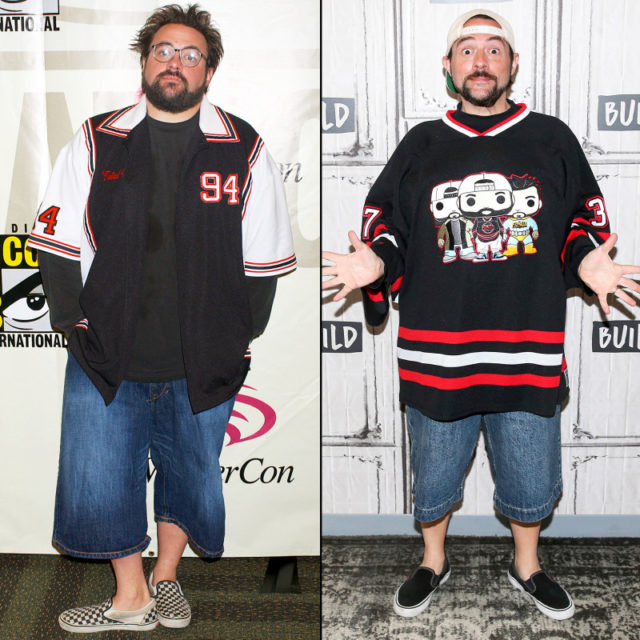 The rapper posted a picture of her toned body on Instagram in May of 2018 with the caption, “Proud to say it’s been 4 months I have only drunk water no other juices or soda & I cut out bread & Lord knows that’s been the hardest for me!”

Although Elliott’s weight seems to have gone back up slightly since then, she still maintains a healthy figure. She says not only is she happy with her body but that her new diet has also made her feel less sluggish and even made her skin glow.

“Didn’t [lose] 70 pounds that was during my Under Construction album,” Elliott wrote on Twitter in 2014. “I lost 30 eating healthy/work out to @shauntfitness T25 videos.” 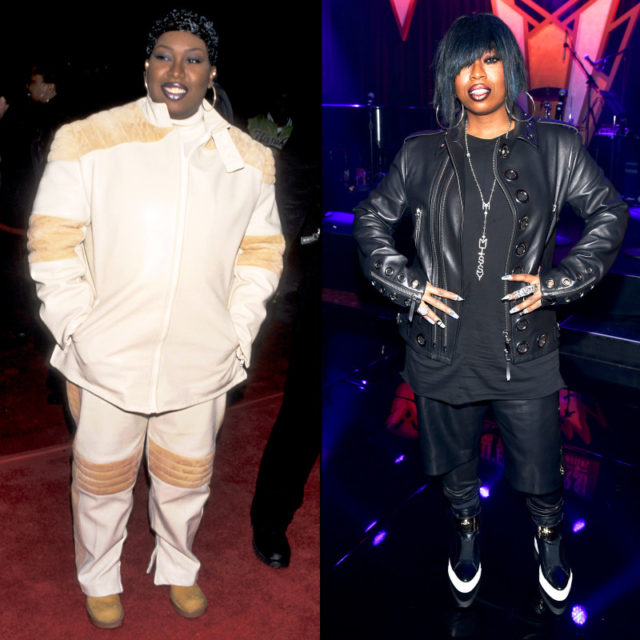 The Superbad actor is enjoying his new super slim figure, which was something he did for another one of his projects, 21 Jump Street. According to a close source, he did so with the help of a nutritionist and a trainer, Us Weekly reported in 2011.

That may have been a while back, but Hill has only continued to lose weight throughout the years. Just last year, he flaunted his trimmer figure and looked quite dapper walking down the red carpet at the 2018 Met Gala. 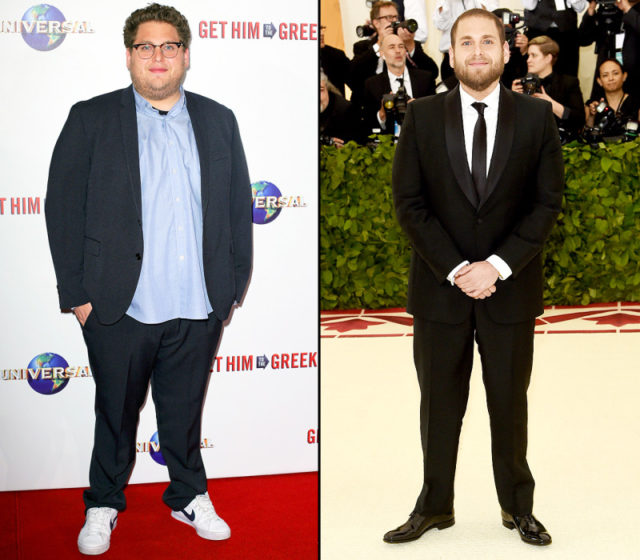 Tyler Baltierra is one of the OG Teen Mom stars, and fans of the show will remember him being quite different to how he looks now. But in February 2018, he showed off his slimmer figure and also gained some bragging rights having lost 35 pounds in just two months!

His secret? Avoiding carbs and eating loads of fresh fruit, vegetables, seafood, and lean meats. “I’m not really ‘on a diet’ I just started caring more deeply about what I was putting in my body,” Baltierra tweeted at the time. “To jumpstart the weight loss, I cut out carbs (besides toast in the a.m.) filled up on fruit, smoked fish, & vegetables for lunch & ate lean meats, vegetables & salad for dinner.” 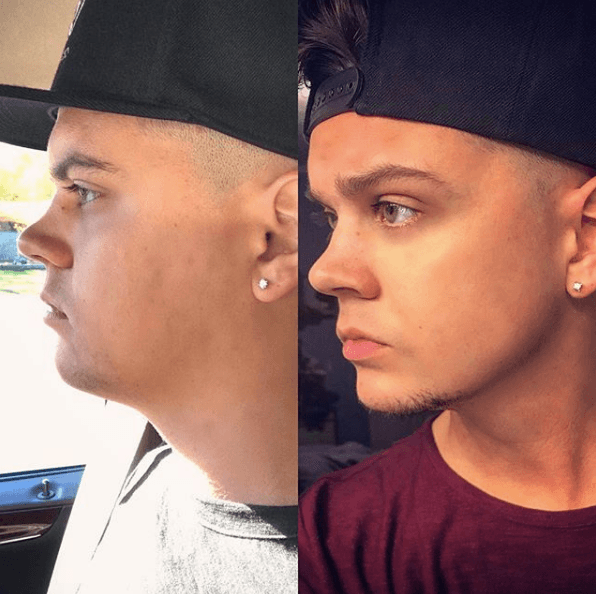 Here Comes – move over Honey Boo-Boo – Mama June! The reality star and her signature double chin are gone, and one look at her now will make you say “hot mama!”.

Once weighing in at 460 pounds, “Mama” June Shannon has lost a jaw-dropping 300 pounds entirely. She did so by undergoing procedures like a gastric sleeve surgery and a tummy tuck in May 2016. But she also works out with a trainer 2-3 times a week to get and stay fitter. 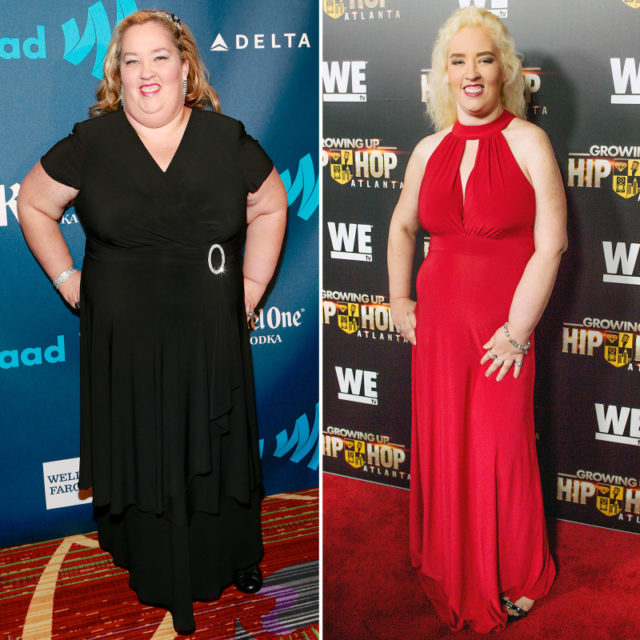 You probably wouldn’t think that late-night host Jimmy Kimmel needed to lose weight – and neither did he until Dr. Oz shared concern about it when he was a guest on his talk show in 2010.

After this, Kimmel began undertook a diet plan that included only 2 protein shakes and a small dinner for 8 weeks straight. Afterward, he moved on to a 2000 calorie per day diet, which helped him lose 25 pounds in a very short amount of time. In 2015, Jimmy explained how since then he has been practicing intermittent fasting, where he eats only 500 calories a day, 2 days a week, to keep up his slimmer figure. 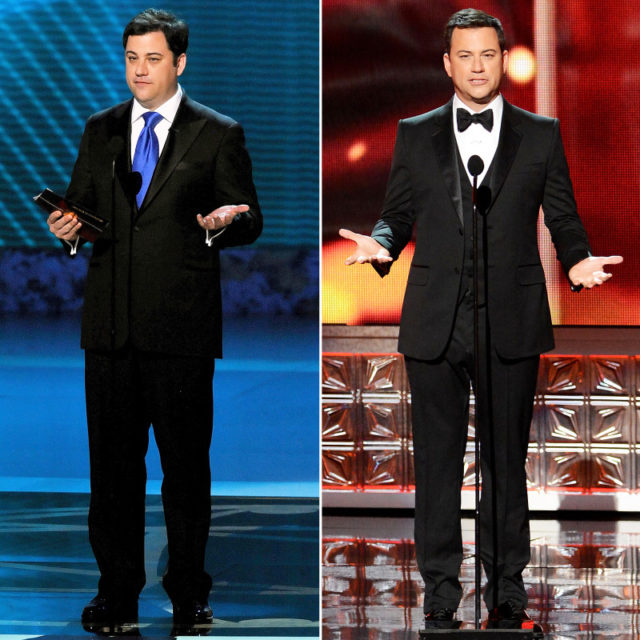 The Fosters star Rosie O’ Donnell lost a total of 50 pounds back in April of 2014, although 40 of those could be attributed to weight loss surgery that she underwent a couple of months earlier. Posting before and after pictures of herself on Instagram, The View alum wrote, “Almost 50 lbs off – I can see it now.” 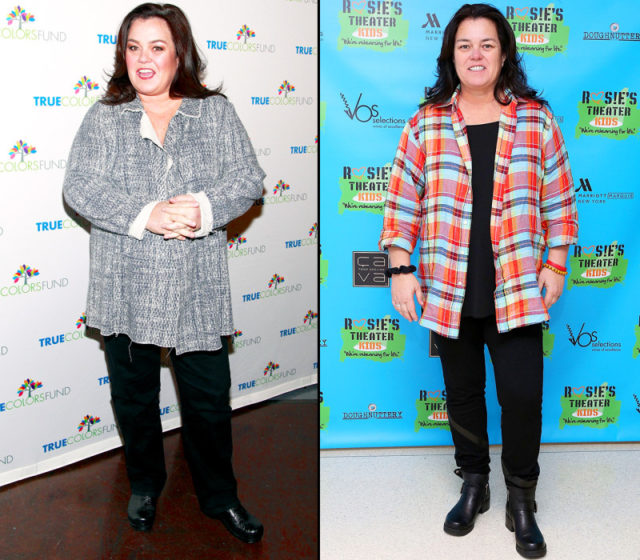 In 2013, Chris Pratt had to go from dorky Andy Dwyer of Parks and Rec to superhero material for his role in The Guardians of the Galaxy quick! To do so, Pratt underwent a rigorous training regimen and a special diet. This included working out with a trainer 5 days a week, along with activities like P90X, swimming, boxing, and running.

As for diet, Pratt had to give up beer completely, although he had to increase his calorie intake to 4000 per day and drink a whole lot of water. 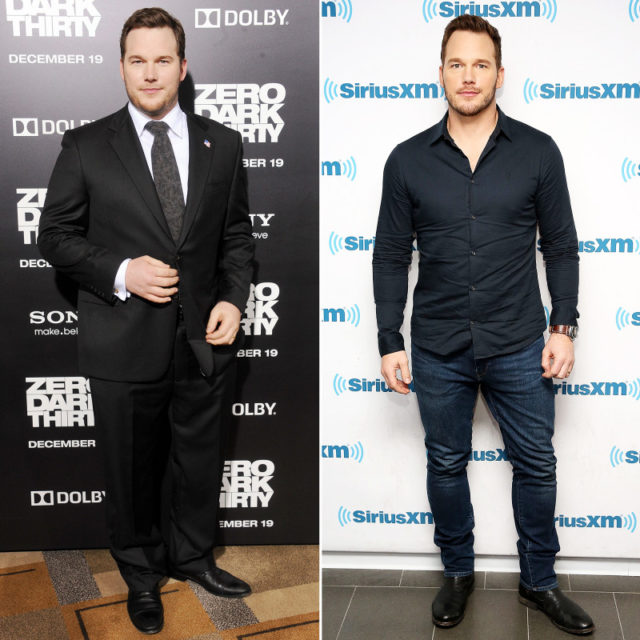 Jersey Shore reality star Snooki was always proud of her curvy figure, but when she gave birth to her son Lorenzo, she gained more weight than she’d wanted to. A short while after, she showed off her newly toned 42-pound reduced post-baby bod on the cover of the March 2013 US Weekly.

“When you have a baby, everything changes.” She said in the interview with the magazine, “I lost it for me.” 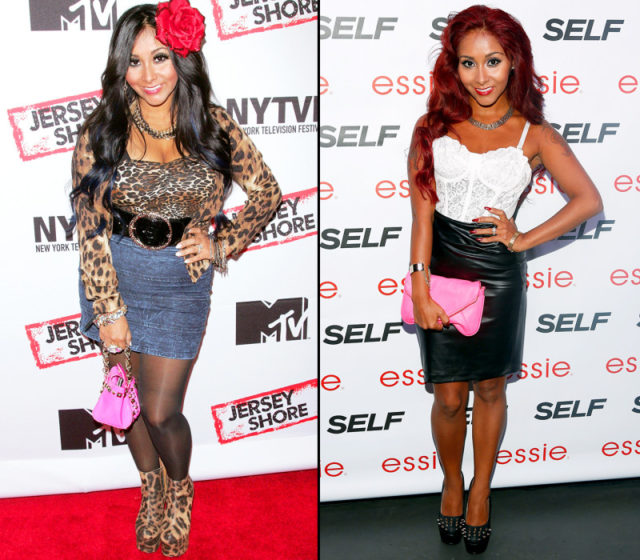 The singing diva is another woman who’s proud of her curves. But she did take time off The Voice, right before the season 4 premiere in 2013 March to lose 20 pounds of extra weight. She did so by working out with the help of fitness guru Tee Sorge and practicing yoga.

“It’s more of a mind-body thing for her,” a source revealed to Us Magazine. “She believes in exercise that she enjoys, doing strength work as opposed to intense cardio.” 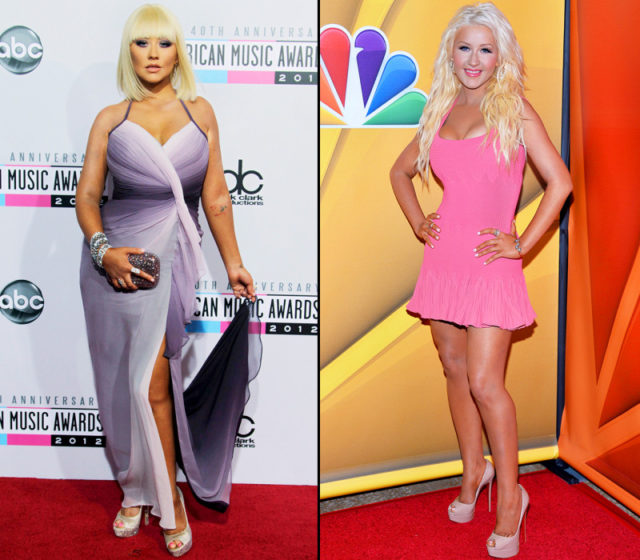 The “Baggage Claim” singer dropped an estimated 25 pounds of extra “baggage” in 2013. In November of the same year, she hit back at critics who claimed she’d undergone surgery to make the transformation.

“I lost my weight the healthy and good old fashioned way,” Lambert wrote in her personal blog. “Watching what I eat and working out with my trainer Bill Crutchfield.” 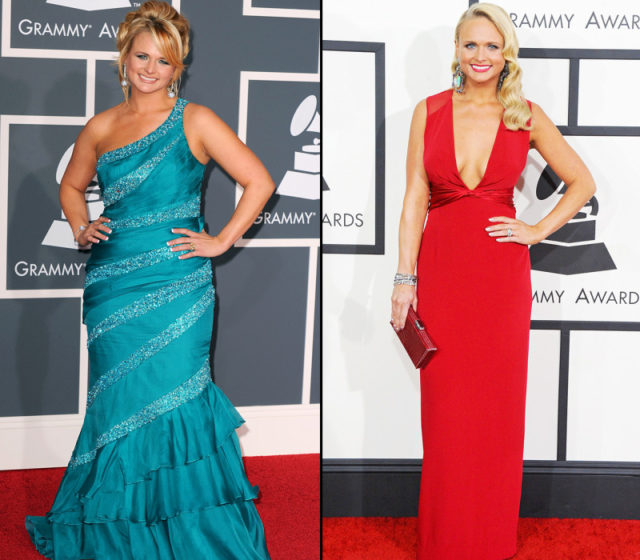 American Idol winner Jordin Sparks showed off her slim and healthy body as she walked in front of the cameras at the 2012 Teen Choice Awards, a whole 50 pounds lighter! Speaking to Us Magazine at the red carpet, she said, “There is no secret. It’s just eating better and working out! It’s definitely a daily thing.”

The singer also revealed that she worked out frequently, having an affinity for high-energy dance routines like Zumba. She also spoke out about portion control when it comes to eating. “I stop now when I’m full,” she shared. “I love food and I love to eat. My thing was, do I really need seconds or do I want it just because it tastes good?” 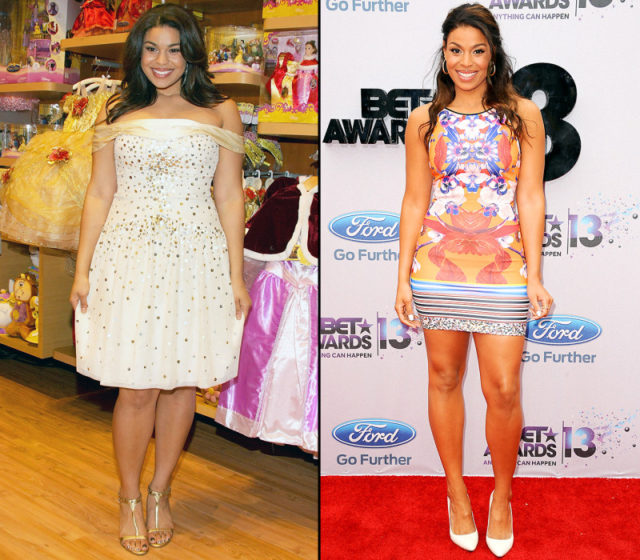 In April 2011, The Fat Actress star completed her weight loss journey, going from a size 14 to a 6, which made for a banging 100-pound transformation in just a year.

The former Jenny Craig spokesperson also opened up about her previous struggles with weight loss, which she had not been able to maintain in the past. This time, she says, she went about it the right way. “She didn’t crash diet,” a source told Us Weekly. “Nothing was working for her, so she created [nutritionist-developed supplement plan] Organic Liaison.” 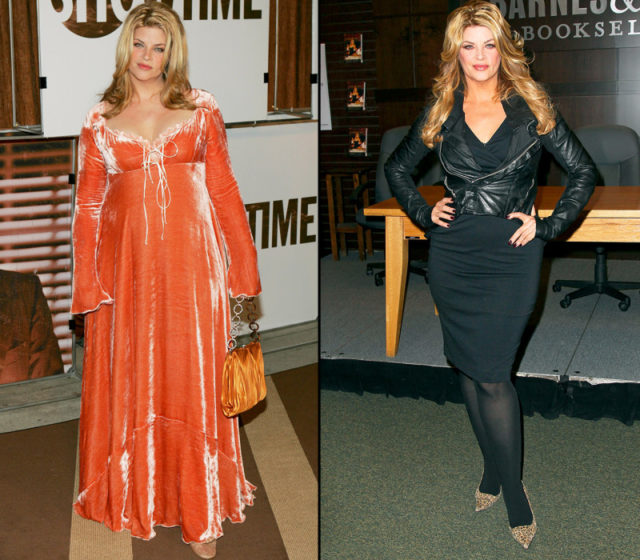 Kelly Osbourne isn’t proud of her struggles with drug addiction, which landed her in rehab a whole 3 times, but it was her weight that got her the most attention. “I took more hell for being fat than I did for being an absolute raging drug addict,” she said, “I will never understand that.”

But she went about losing weight the healthy way by eating right, controlling her portions and working out. “I’m really proud to look in the mirror and not hate every single thing I see,” she told Us. “I no longer think, Why don’t I look like this girl or that girl?” 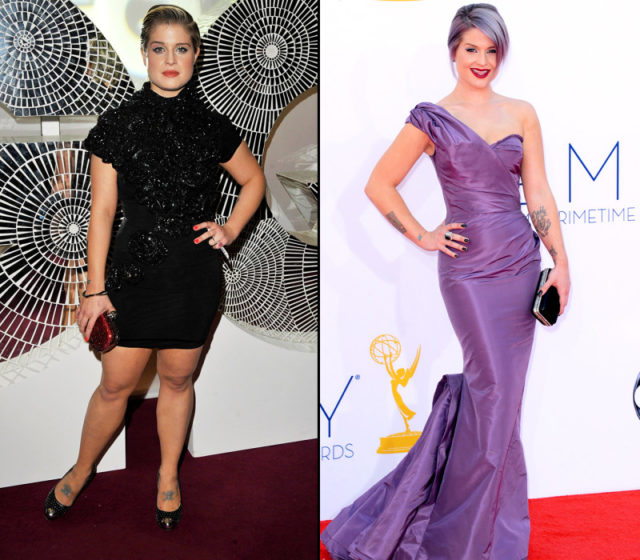 “I just got sick of being fat,” Carey told Us Weekly. This prompted him to lose a total of 70 pounds back in 2010. His one rule during that time? “No doughnuts!”

Along with that, Carey also followed a cardio program that helped him shed the pounds quicker. “I do work with somebody who gives me advice on what to do, how many minutes to run, what my heart rate should be and all that kind of stuff.” 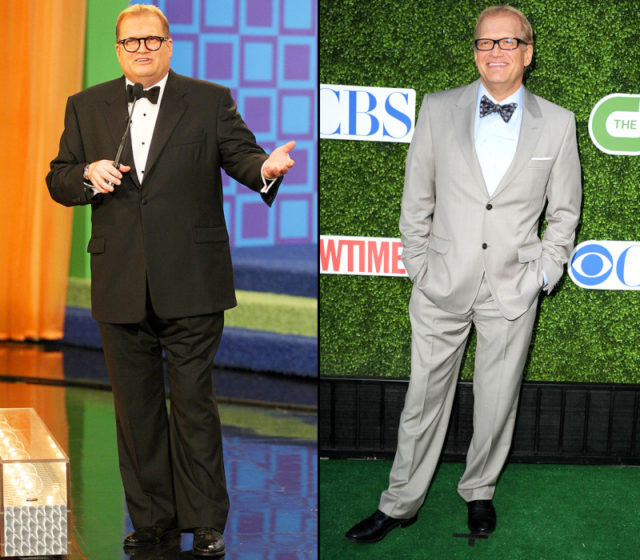